Skip to content
On Halloween 2007, Meryl Smith decided to give birth to herself. An exercise that most would find hard to imagine? Artist and profesional head turner, Meryl Smith, finds halloween humorous and a time to be un -human. So with the help of her  socks on her hands and an upside down unitard on, Smith did […]
Posted in Collaboration 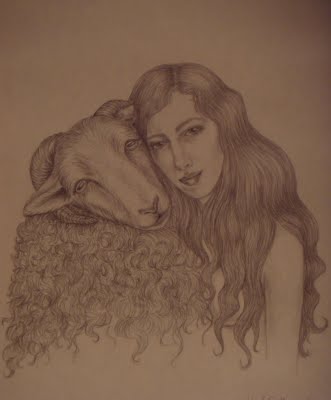 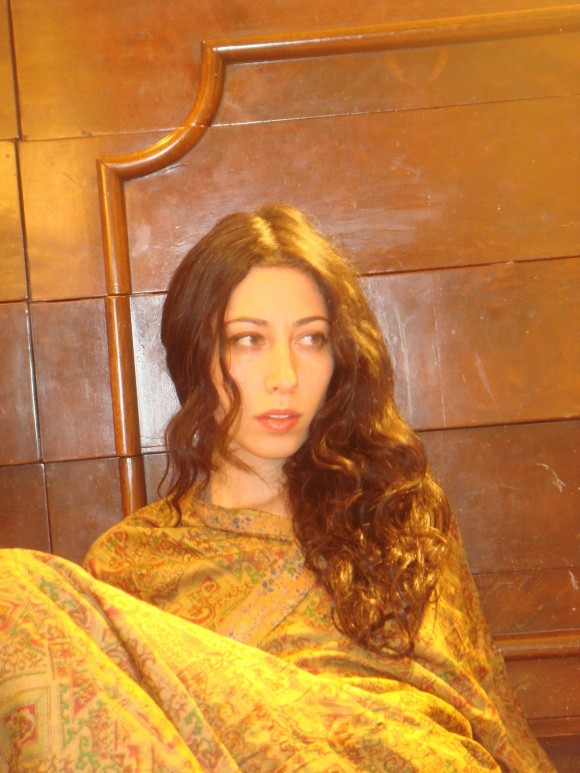 On Halloween 2007, Meryl Smith decided to give birth to herself. An exercise that most would find hard to imagine? Artist and profesional head turner, Meryl Smith, finds halloween humorous and a time to be un -human. So with the help of her  socks on her hands and an upside down unitard on, Smith did just that.

It seems Miss Smith gets into the Halloween spirit every year with disgusting outfits that she wears with pride, but November 31st isn’t the only day she gets enthusiastic. When asked what animal she would be, she replied ‘a dog’, why? ‘Because they look like they have so much fun!’.

Maybe thats why then, she chose to create her own dog for a group exhibition at The Honey Space. Five curators asked artists to create sculptures that fit the measurement requirements for international carry-on luggage,  Meryl made ”Excess Bagage” a Louis Vuitton monographed bag in the shape of a small hand held ‘handbag’ dog. With big ears, paws and claws, and a wet looking snout, the dog looked so alive you were left questioning the zip?!  Now she had made a doggie bag of tricks!

Meryl Smith is an artist based in downtown New York and  has had plentiful coverage of her art work,  having worked with the likes of  the deadly Neck Face and Ryan McGinley. Smith has shown her work at the likes of  Max Fish Permanent Collection Gallery, Priska C. Juschka Fine Art NYC and OHWOW Gallery.

She was asked to make a pencil sketch drawing of safari animals that was to be  screen printed onto a skateboard for famous skate boarder Kevin ‘Spanky’ Long. An extreme detailed drawing of lions, bears and giraffes splattered along the underside of the deck. More growling animals to add to her list.

T-shirt. Tee Shirt. Tea shirt? A play on words was the inspiration behind Smith’s actual tea bag tee shirt. A fully bagged tee which held tea leaves heavy at the bottom, sagging it down and staining the cotton. The tag of the tee shirt was crafted into a tea bag string and tab with tongue-in cheek labelling. A perfect combination of morning essencials; a cotton tee shirt and a cup of tea, if only you could have both at the same time?

The walls of Meryl Smith’s home contain a million tiny intricate pieces all adding up to one giant master piece of the inside of her mind. A clutter of yarn made children in wheelchairs, rusting typewriters in the weeds outside, a decaying wooden chair holding a hand made fury creature up (or perhaps the creature is holding up the chair), five monster head pieces, two love birds in a cage, and a hampster in a skeleton costume. It is full. But she must still makes room for  ideas to grow and hatch. A home that becomes infested with her projects has to be visually stimulating. By the look of the work she is producing I would say she has it set up just right.

Adding to her variety of doings, Meryl Smith has recently created work ‘Ewe and Me’ for ‘Paper Chase’ for Plaything Gallery x OHWOW Gallery exhibition which took place in New Zealand and the front window displays of a cute display of a paper-mice ‘life’ for Opening Ceremony which were for the launch of Spike Jones’ new short film ‘I’m Here’. Which should be on display this week!

She is inspiring, fresh and constantly pushing boundaries. All defining factors in going towards an artist who is making some big noise. If you haven’t already been exposed to the stomach turning world of Meryl Smith, introduce yourself today. Warning: Certain scenes and references may offend some people xx 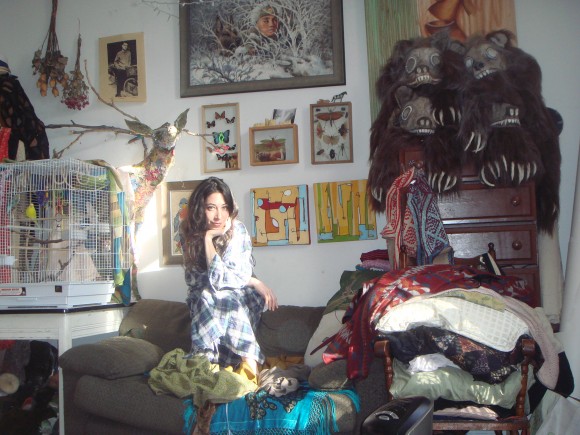 -Your work seems to always create a shock factor for its audience, is this intentional? If so, do you start with the ‘shock’ of an idea first and work backwards, or is it an organic process for you to end up at that point?

Its never been my intention to “shock” people but more so to create something thought provoking.  The process is organic. I’m mulling over a theme and I am so startled at the way the world is handling this particular theme that I feel they need to be jolted back to reality and away from their fantasy. I use my art as a way to alert people.

-When creating a piece of work, do you have your audience in mind?

Yes. But I haven’t always, I think many of the themes I’ve explored are pretty universal.  It’s only with my more recent ideas that i’ve been considering a more specific audience and for each piece i have different people in mind that i’d like a reaction from.

Where do you source your inspirations from?

The museum of natural history, petfinder.com, things on the sidewalk 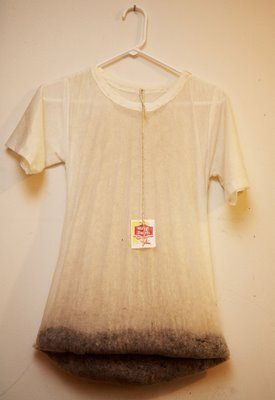 Have you ever started a piece that you left for a while and came back to later? If so, which one, and why do you think you needed this time?

I keep a list of ideas as they come, hoping that I can just go back and pick one out when I need to. I have so many that i hope to make someday but i always end up waiting until the very last minute and doing something new.  If I’m sitting on an idea it’s probably because i can get a bit lazy or I’ve run out of space and money. As far as things I’ve actually begun building, I have some that are still in the armature stage and I’ll probably never go back to them. I keep them just in case….but its more likely because of my problem throwing anything away.

You seem to have a good sense of humour when it comes to creating work, are you trying to ‘break’ the so called ‘snobbery’ of the often referred to art world?

No. The art world is the last thing i think about. That’s just how my thought process works. I think that many of my ideas have a much heavier point to make and adding the humor and sarcasm just makes it easier to digest. It helps me to painlessly address something much more serious.

Tell us about your study/practices?

One foot in front of the other.

Most of your work is in 3D sculptural form, have you always created physical art works or do you start 2D and work an idea up to its finished form. What is your process here?

I just visualize it in my mind…then i make it. sometimes i do a really quick sketch just to resolve the positioning or something. But it pretty much goes straight from my brain to 3D. After the idea comes, its all just very technical.

Your work space/home is amazing! Does it change its form with you and your art work depending on what creation your are working on, or is it a accumulation of everything up to now?

Its definitely an accumulation. Sometimes I think of my home as a big growing ameba that just eats up whatever it comes into contact with. I would say something gets unintentionally added to it every single day, and I might have a psychological problem when it comes to getting rid of things.  Its a really difficult place to work but its all i have.  When its in studio/work mode, it is total chaos and everything just goes to hell. It really becomes a problem when i have to share my bed with a sculpture. Whenever there’s a new addition to my home, whether its a sculpture or a pet or a pair of socks (ok, maybe not a pair of socks), I have to devote hours, sometimes days, rearranging. 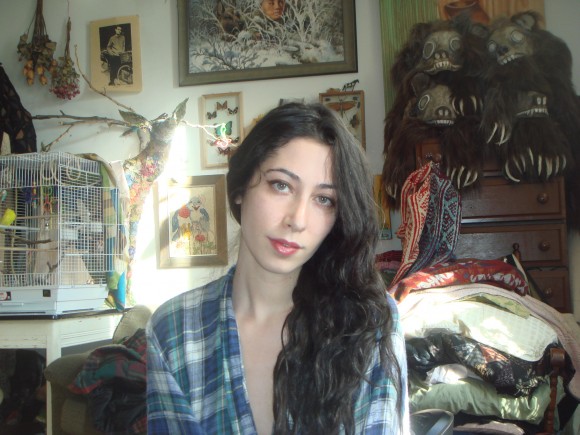 Where do you see you and your art work heading?

Well it’s hard to say. I think my subject matter might be getting more serious and I might try to explore a some new techniques that don’t leave me bandaged head to toe from cuts and burns. There are many days when I just want to make Christmas cards. I definitely would like to pay some more attention to some of my 2D work.

Something you would love to do in your career…

Get a new one working with animals

Time out for you includes…..? 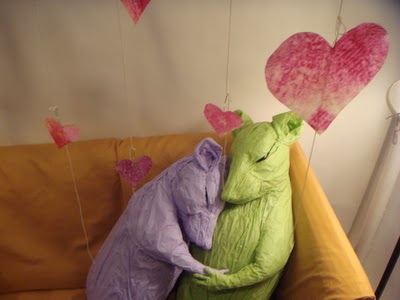 Something your mother always told you…